Neville Sanjana’s lab develops technologies to understand how human genetic variants cause diseases of the nervous system and cancer. The lab employs a multi-disciplinary approach, combining genome engineering, pooled genetic screens, bioinformatics, electrophysiology, and imaging, to dissect the inner workings of the human genome and its dysfunction in autism and tumor evolution. The Sanjana lab is comprised of molecular engineers, biologists, neuroscientists, computer scientists and bioscience entrepreneurs who are passionate about creating new technologies for genomics and advancing human health. The lab is also affiliated with the Department of Biology at New York University. 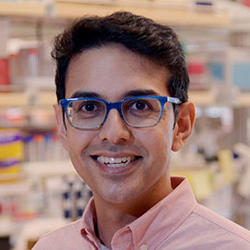 Neville Sanjana, PhD, is a Core Faculty Member at the New York Genome Center. He holds a joint appointment as Assistant Professor in the Department of Biology at New York University and is an Assistant Professor of Neuroscience and Physiology at the NYU School of Medicine. As a bioengineer, Dr. Sanjana is focused on creating new tools to understand the impact of genetic changes on the nervous system and cancer evolution. His research interests include bioengineering, genomics, neuroscience, cancer biology and systems biology. Dr. Sanjana and his research team use a multi-disciplinary approach, combining genome engineering, high-throughput screens, bioinformatics, electrophysiology, and imaging, to dissect the inner workings of the human genome and its dysfunction in tumor evolution and neurodevelopmental disorders. Utilizing new technologies for large-scale DNA synthesis, gene editing and next-generation sequencing, the Sanjana Lab has developed pooled screening approaches for functional genomics, creating CRISPR libraries to target all protein-coding genes and noncoding regions of the genome. Dr. Sanjana has identified novel genetic drivers of melanoma drug resistance, drivers of metastasis in vivo, and mechanisms used by tumors to evade immunotherapy. One of the major goals of the Sanjana Lab is to continue expanding the genome engineering toolbox to further scientific understanding of the noncoding genome and its vital role in human health and disease. Dr. Sanjana’s recent awards include the prestigious Presidential Early Career Award for Scientists and Engineers, being named the Leichtung Family Investigator by the Brain & Behavior Research Foundation, the AAAS Wachtel Prize for Cancer Research, the DARPA Young Faculty Award, the Kimmel Scholar Award, and the NIH’s New Innovator Award. Prior to joining the New York Genome Center, he was a Simons Postdoctoral Fellow at the Broad Institute of Harvard and MIT. Dr. Sanjana holds a PhD in Brain and Cognitive Sciences from MIT and a BS in Symbolic Systems and a BA in English from Stanford University. 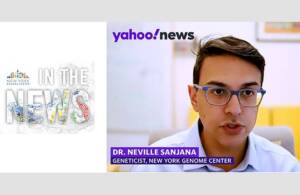