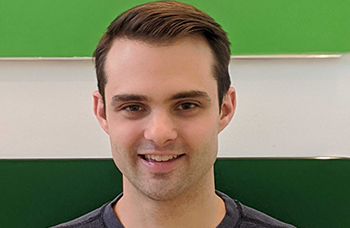 The award is named for the late Harold M. Weintraub, PhD, a highly regarded scientist who helped found the Basic Sciences Division at the Fred Hutchinson Cancer Research Center and died of brain cancer in 1995 at age 49. Since the award was launched in his honor in 2000, there have been a total of 289 recipients, including this year’s 12 honorees from three countries.

“This is an esteemed international prize for outstanding PhD research – and a great honor for Andrew, Rahul, and the New York Genome Center, “ said Tom Maniatis, PhD, Evnin Family Scientific Director and Chief Executive Officer, New York Genome Center. “This recognition has special resonance since Hal Weintraub, who was an exceptional mentor and role model for students, was also a close personal friend.”

Andrew’s research has focused on developing novel computational tools for the analysis of single-cell sequencing datasets. In particular, he has designed a set of algorithms to integrate multiple datasets together by matching or ‘aligning’ groups of cells that are similar across different experiments. These methods have been published in Nature Biotechnology and Cell, and allow researchers to understand how groups of cells change through experimental conditions, disease states, and evolution. In addition, Andrew is a lead developer of the Satija Lab’s Seurat package. He has made all of his methods freely available as open-source software, which has enabled his integrative tools to be widely used in the community.

All awardees will present their research findings in a scientific symposium honoring Dr. Weintraub and his commitment to innovative science. The award symposium will take place May 1, 2020, at the Fred Hutchinson Cancer Research Center’s Robert W. Day Campus.

The New York Genome Center (NYGC) is an independent, nonprofit academic research institution focused on furthering genomic research that leads to scientific advances and new insights and therapies for patients with neurodegenerative disease, neuropsychiatric disease, and cancer. Leveraging our strengths in whole genome sequencing, genomic analysis, and development of new genomic tools, the NYGC serves as a nexus for collaboration in disease-focused genomic research for the New York medical and academic communities and beyond.

NYGC harnesses the expertise and builds on the combined strengths of our faculty, staff scientists, member institutions, scientific working groups, affiliate members, and industry partners to advance genomic discovery. Central to our scientific mission is an outstanding faculty who lead independent research labs based at the NYGC, and hold joint tenure-track appointments with one of our member institutions.