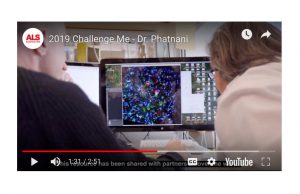 Researchers at the NYGC led the global collaboration that developed a multidimensional gene expression atlas that offers a previously unavailable view of disease progression in ALS. Utilizing spatial transcriptomics technology combined with a novel computational approach, the team identified early changes not observable using traditional sequencing methods. Their findings, published in Science in April 2019, revealed new insights into disease signaling pathways, suggested new target opportunities for designing therapeutics and treatments, and will provide a framework for further mapping and better understanding of the disease mechanisms of other neurodegenerative diseases with common pathways.

Hemali Phatnani, PhD, Director of NYGC’s Center for Genomics of Neurodegenerative Disease (CGND), is senior author of the study and Silas Maniatis, PhD, Staff Scientist, is co-first author. Their collaborators included scientists from the Simons Foundation’s Flatiron Institute in New York, the SciLifeLab and KTH Royal Institute of Technology in Sweden, and New York University.

Read more about the atlas here. 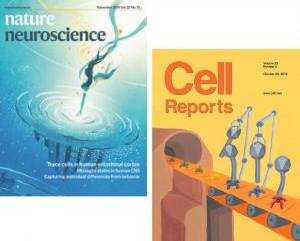 NYGC’s Center for Genomics of Neurodegenerative Disease (CGND), led by Hemali Phatnani, PhD, Director, serves as an organizing hub of ALS data collection and analysis within the research community. The CGND’s development of the ALS Consortium, a global collaboration of clinicians, scientists, geneticists, and computational biologists, has rapidly grown over the last five years to include more than 30 member institutions in countries around the world. The result is ALS data sharing on an unparalleled and unprecedented scale, empowering an integrated worldwide approach to working toward new treatments and effective therapies for ALS.

In 2019, the CGND’s collaborative approach contributed to these significant advances in ALS research:

Through a $40 million grant awarded in 2015  from the National Human Genome Research Institute, a division of the National Institutes of Health (NIH), the NYGC created a Center for Common Disease Genomics, which is engaged in large-scale whole genome sequencing studies of autism and other complex diseases.

Key milestones in 2019 include:

30,000 Whole Genomes of Autism Patients and Their Families Sequenced
The scale of this data set, which is being sequenced and analyzed through NYGC’s Center for Common Disease Genomics, reached this milestone by year-end 2019. It is one of the largest datasets available for researchers to study, and is helping to uncover new insights into autism.

New Autism Risk Gene Variants Identified
In August 2019, SPARK released its pilot study, an analysis of exome sequencing of 457 autism families. The research team included Evan Eichler, PhD, University of Washington School of Medicine, and Associate Member, NYGC, and was led by Wendy Chung, MD, PhD, Columbia University, and Affiliate Member, NYGC. Through their analysis, the researchers identified 647 rare variants that were present for the first time in a family member, either as a result of a mutation in the egg or sperm of one of the parents, or a variant that arises in the fertilized egg. They also found indels, which are insertions or deletions of bases in the genome, that appeared at higher frequency in those with autism as compared to those without autism. Many of these variants were previously known to be associated with autism, while others emerged for the first time. Their study was published in NPJ Genomic Medicine. The next phase of the SPARK project will leverage the whole genome sequencing and analysis of some 1,600 autism families, conducted by NYGC researchers. Reports on these findings are expected to be released throughout 2020.

In fall 2019, the NYGC announced the appointment of Thomas Lehner, PhD, MPH, as Scientific Director of Neuropsychiatric Disease Genomics. Dr. Lehner joined the NYGC after a distinguished 15-year tenure at the National Institute of Mental Health (NIMH), a division of the National Institutes of Health, where he was instrumental in the conception and development of the NIMH’s comprehensive neuropsychiatric genomics program. Dr. Lehner is developing and spearheading the overarching scientific strategy for NYGC’s neuropsychiatric disease genomics research.

Internationally renowned geneticist Mary-Claire King, PhD, joined the NYGC faculty on a consulting basis as Senior Associate Core Member in November 2019. Dr. King is the American Cancer Society Professor in the Departments of Genome Sciences and Medicine at the University of Washington. She was the first to show that breast and ovarian cancer is inherited in some families as the result of mutations in the gene that she named BRCA1, a discovery that has transformed the diagnosis, drug development and treatment of this inherited form of breast cancer. More recently, Dr. King has focused on the genetics of schizophrenia, contributing to the understanding of complex disease inheritance. She will support NYGC’s efforts to understand the genetic basis of psychiatric disorders.

These projects achieved the following progress milestones in 2019:

Polyethnic-1000 Advances to Extensive Prospective Study
At an October 2019 retreat, researchers shared the findings of the Polytethnic-1000 project’s retrospective analysis of over 100 sequenced tumor samples from patients, covering cancer type, frequency of genetic variation, and an estimation of genetic ancestry. The team has forged strong connections between academic centers and partner hospitals and is now advancing to the study’s next phase, an extensive prospective study of patients. Study findings will be stored in a database that will serve as a global resource for developing hypotheses and understanding of ethnic and racial diversity in cancer. Where sequencing reveals an actionable mutation in the tumor, the study team will validate the results clinically and share the information with the treating physician.

Polyethnic-1000 was launched with the support of a $1 million grant by The Mark Foundation for Cancer Research. Additional support for the project was provided by other generous donors, including the Mortimer B. Zuckerman Family Fund and Weslie Janeway. 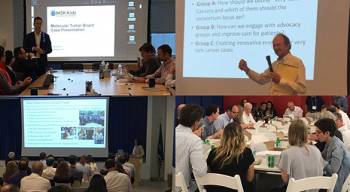 Very Rare Cancer Consortium Launches Multi-Institutional Molecular Tumor Board
Oncologists, hematologists, scientists, pathologists, computational biologists, and other members of the cancer genomics community are convening at the NYGC on a regular basis to hold multidisciplinary molecular tumor board meetings. Clinicians from different hospitals report case conferences to the tumor board to determine the most effective treatment for patients with very rare cancers. Dr. Varmus and Olivier Elemento, PhD, Director, Englander Institute for Precision Medicine, Weill Cornell Medicine, and Affiliate Member, NYGC, are co-leading the consortium and its tumor board.

Clinicians used the NYGC Clinical Lab’s Whole Genome and Transcriptome Sequencing (WGTS) oncology test to inform their treatment plan for a patient with pancreatic cancer. The WGTS analysis of the patient’s tumor genome identified a variant that has been shown in pre-clinical studies to be sensitive to the BRAF inhibitor drug dabrafenib. Based on this finding, clinicians proceeded to treat the patient with dabrafenib. Overall, the patient’s clinical condition improved significantly, with dabrafenib-induced remission lasting for six months. The paper on the case was published in Molecular Case Studies in September 2019. NYGC scientists Kaz Wrzeszczynski, PhD, Assistant Director, Clinical Oncology Informatics, NYGC, is co-corresponding author on the paper on the pancreatic case with Scott Powers, PhD, and Minsig Choi, MD, of Stony Brook Cancer Center, with other NYGC scientists from the NYGC Clinical Lab and Bioinformatics and Sequencing teams among the co-authors.

“Interrogation of single cells taken one step further,“ is how one media outlet heralded the spring 2019 release of ECCITE-seq, which extends CITE-seq, the powerful single-cell analysis tool developed by NYGC scientists in 2017, for use in combination with exploratory CRISPR gene editing screens. The expanded technology was developed in a collaboration led by the NYGC Technology Innovation Lab with the labs of NYGC Core Faculty Members Neville Sanjana, PhD, and Rahul Satija, PhD, who hold joint appointments at NYU, and researchers from The Jackson Laboratory. The team’s report on the tool, published in Nature Methods in April and featured on its May 2019 cover, includes demonstrating ECCITE-seq’s ability to finely dissect specific cell subtypes and characterize malignant populations in a sample from a patient with cutaneous T cell lymphoma. ECCITE-seq has rapidly been adopted by research institutes throughout the world, demonstrating its important impact and utility to the field. 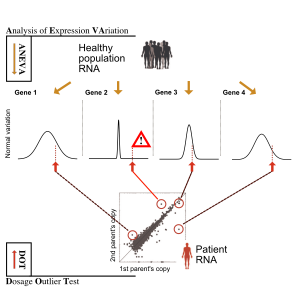 ANEVA Method Improves Diagnosis of Rare Disease
ANEVA (ANalysis of Expression VAriation), a new method to help diagnose rare disease, was developed in a study supervised by NYGC Core Faculty Member Tuuli Lappalainen, PhD. The method first takes data from a large reference sample of healthy individuals. Then, using the ANEVA Dosage Outlier Test, researchers were able to diagnose additional patients where previous methods of genome and RNA analysis had failed to identify their rare disease variants. The study was published in Science in October 2019.

The NYGC Clinical Lab’s Clinical Constitutional Whole-Genome Sequencing (WGS) Test, received New York State Department of Health approval by year-end 2019. This test offers physicians the most complete package of genomic data available for patients with undiagnosed diseases, as well as those patients who are seeking predispositional genetic testing. The NYGC Bioinformatics team collaborated on the development of an innovative genomic tool in 2017– Expansion Hunter – that is used in the WGS test. It enables the analysis of genetic variation in short tandem repeat regions of the genome.

In 2019, five new Scientific Working Groups were established at the NYGC:

Enabling Innovation Working Group. This group has attracted a large community of collaborators – over 40 researchers from eight institutions – and will be meeting regularly to advance the development of novel genomic methods and technology.

In December 2019, the NYGC announced that Hackensack Meridian Health and the Georgetown Lombardi Comprehensive Cancer Center have become the two newest institutional associate members of the NYGC.

The new members joined the NYGC through two separate partnerships with distinct collaborative research objectives. The first partnership, led by Hackensack Meridian Health’s CDI, is focused on exploring the genetics underlying the risk factors for behavioral disorders and identifying genetic markers that help physicians predict and manage these disorders more effectively. The second partnership is focused on cancer genomics and led by Georgetown Lombardi Comprehensive Cancer Center, which includes investigators from Georgetown University Medical Center, along with the Hackensack Meridian Health’s John Theurer Cancer Center and CDI. This partnership seeks to use advanced genetic analyses to better understand risk factors for emergence of certain aggressive cancers, such as pediatric brain tumors; why certain cancers fail to respond to immunotherapy; and identify genetic markers or cellular factors that can improve patient outcomes.

The workshop offers students early in their training or career who have projects involving next generation sequencing a mix of lectures from experts in the field and hands-on exercises.

Check out all upcoming events at the NYGC here.