NEW YORK, NY (March 21, 2018) — Hemali Phatnani, PhD, Director of the Center for Genomics of Neurodegenerative Disease (CGND) at the New York Genome Center (NYGC), and the NYGC ALS Consortium, a worldwide collaborative effort initiated by the CGND just over three years ago to advance study of the disease, are part of the international research team, led by John Landers, PhD, at UMass Medical School, and Bryan Traynor, MD, PhD, at the National Institute on Aging at the National Institutes of Health (NIH), that have identified KIF5A as a new gene associated with the development of amyotrophic lateral sclerosis (ALS).

The discovery, published as a cover story today in Neuron, advances the understanding of what causes ALS and further implicates the role of cytoskeletal defects in the axon as a common factor in the disease. It points to the cytoskeleton as a potential target for new drug development. 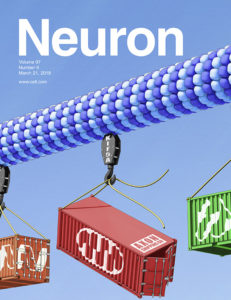 The KIF5A gene was discovered through a genome-wide search for ALS risk, comparing genomes from more than 20,800 ALS cases with 59,800 controls. Independently, a “rare variant burden analysis” was conducted on 1,138 familial ALS cases and 19,494 controls. Both approaches identified KIF5A as a novel gene associated with ALS.

Dr. Phatnani, credited as an individual co-author on study with the NYGC ALS Consortium a group co-author, has established the CGND as an organizing global hub of ALS data collection and analysis. The CGND is involved with many large, global strategic initiatives on ALS, including Project MinE and Genomic Translation for ALS Care (GTAC) Consortium, Answer ALS and Target ALS. The CGND’s ALS Consortium, formed just over three years ago, continues to expand rapidly and now formally includes 27 institutional members.

In a press release, Dr. Landers noted that ALS Association funding to study collaborators, including the NYGC ALS Consortium, was “instrumental” to the success of what he termed “the largest collaborative genetics effort in ALS.”

“Without the accomplishments and participation of each one of these groups, we would not have been successful in identifying this ALS gene,” he said. Read the complete press release here.