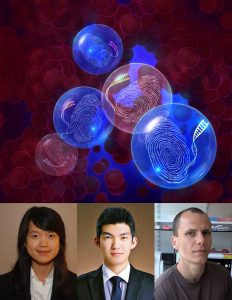 Single-cell RNA sequencing is a powerful tool to dissect cancer complexity, but surface markers to distinguish between normal and cancer cells, or between subclones of cancer cell mutations, are often missing.

GoT links single-cell somatic genotyping with droplet-based single-cell RNA-sequencing in thousands of cells by unique barcodes. The tool allows for targeted detection of specific mutations of interest in combination with the transcriptome of the same cell. The method has important implications for investigating cells within genetically heterogeneous populations, such as tumors. As part of their study, published in Nature on July 3, the team demonstrated application of GoT to disorders of myeloid proliferation, revealing novel insights into how the complex process of blood cell differentiation is corrupted by cancer mutations.

Co-first authors of the GoT study are Landau Lab team members Anna Nam, MD, Hematopathology Fellow; Kyu-Tae Kim, PhD, Postdoctoral Fellow; and Ronan Chaligne, PhD, Postdoctoral Fellow (pictured from l-r in photos). To illustrate the capabilities of the new tool, these researchers’ fingerprints are featured in the study’s accompanying artwork (pictured above top). GoT enables to study the impact of somatic mutations (indicated by a blue glow) in primary human cells, in the context of their native cell identity (DNA “fingerprints”) by linking single-cell somatic genotyping with droplet-based single-cell RNA-seq in thousands of cells by unique barcodes (indicated by different colors on the tips of the “fingerprint” DNA).