“It happened,
Therefore it can happen again:
This is the core of what we have to say.
It can happen, and it can happen anywhere.”
Primo Levi, Auschwitz survivor and author (1919-1987) 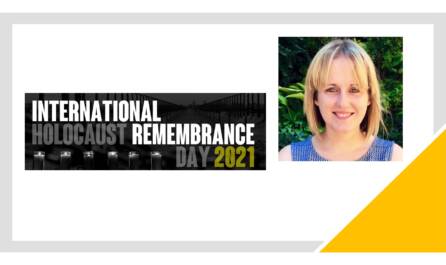 I grew up in Kraków, Poland, about 40 miles from the small town of Oświęcim. On its outskirts an occupying Nazi Germany in 1940 established Auschwitz Birkenau (now Auschwitz-Birkenau Memorial and Museum), the largest of the Nazi concentration and death camps. I will never forget the first time I visited the Auschwitz-Birkenau Memorial when I was about 14 years old. It was horrifying to see with my own eyes how the hateful ideas of anti-Semitism, prejudice, and racism could be transformed into physical instruments of human extermination

January 27 marks International Holocaust Remembrance Day, established by the United Nations General Assembly on the anniversary of that day in 1945 when the Red Army liberated Auschwitz Birkenau. On this day we remember the victims of the genocide orchestrated by the Nazi regime and their collaborators. Six million Jews and millions of other men, women, and children, including Roma, people with disabilities, homosexuals, Slavs, and people of color, were killed because of their perceived racial or biological inferiority, as well as political or religious beliefs.

International Holocaust Remembrance Day is meant to link memories of the past with a call for continuous education and awareness of the Holocaust and similar atrocities around the world. It is through awareness, understanding of history, and taking action that we can hope to make a difference and prevent future genocides. What we can all do to honor this important day is to devote a few minutes of our busy lives to learn something we don’t know about the Holocaust and share what we discovered with our family and friends.

Exhibit “Auschwitz. Not long ago. Not far away”  in the Museum of Jewish Heritage in NYC, on view till May 2, 2021:
https://mjhnyc.org/exhibitions/auschwitz/