CGND’s goals are to use whole genome sequencing to identify mutations that cause neurodegenerative disease. To gain insights into the relationship between mutations, gene expression and disease mechanisms, whole genome sequencing data will ultimately be integrated with other genomic-scale data such as RNA-SEQ, RNA-protein interactions, and DNA methylation patterns.

CGND is helping to create a uniform system of collecting clinical annotation to better enable the integration of genomic data with clinical profiles. This information will be freely available to the research community in a data warehouse for whole genome sequencing and RNA-SEQ analyses. 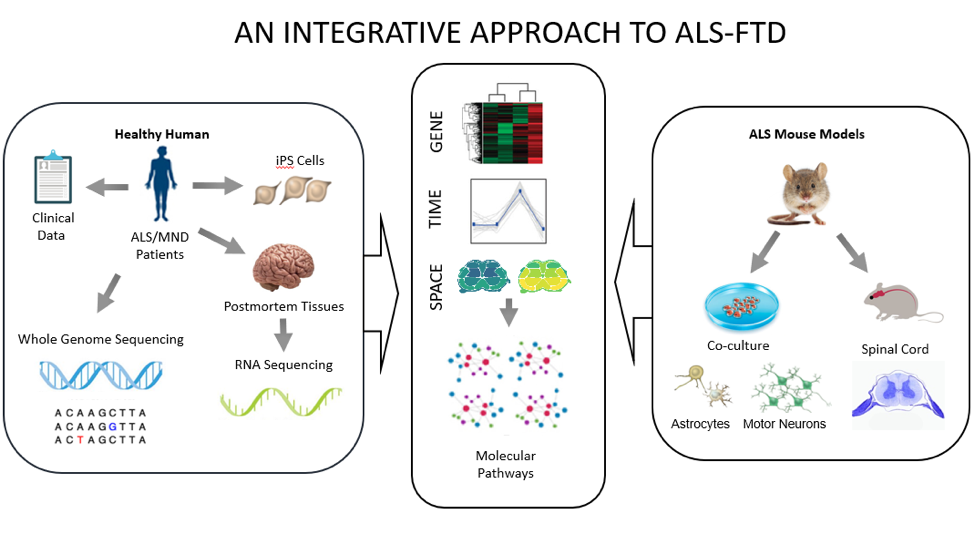 Amyotrophic lateral sclerosis (ALS) is a clinically heterogeneous disorder with respect to a) the site of onset of motor symptoms, b) whether or not motor symptoms are accompanied by cognitive impairment, c) the type of pathology observed in the brain and spinal cord, and d) which cell types are affected by this pathology. The sources of this heterogeneity are presently not well understood. Our aim is to identify pathological signatures which correlate with regional involvement and disease progression in ALS. Furthermore, we aim to identify the perturbations in cellular function and intercellular interactions which accompany pathological features in brain and spinal cord tissues from patients with ALS. In order to accomplish these aims, we are using highly multiplexed protein imaging to deeply phenotype pathological changes in tissues from patients with ALS and spatially resolved transcriptomic profiling to discover changes in gene expression profiles relative to these pathological features.

Multiomic analysis of pathological features in post mortem tissues from patients with ALS-FTD. 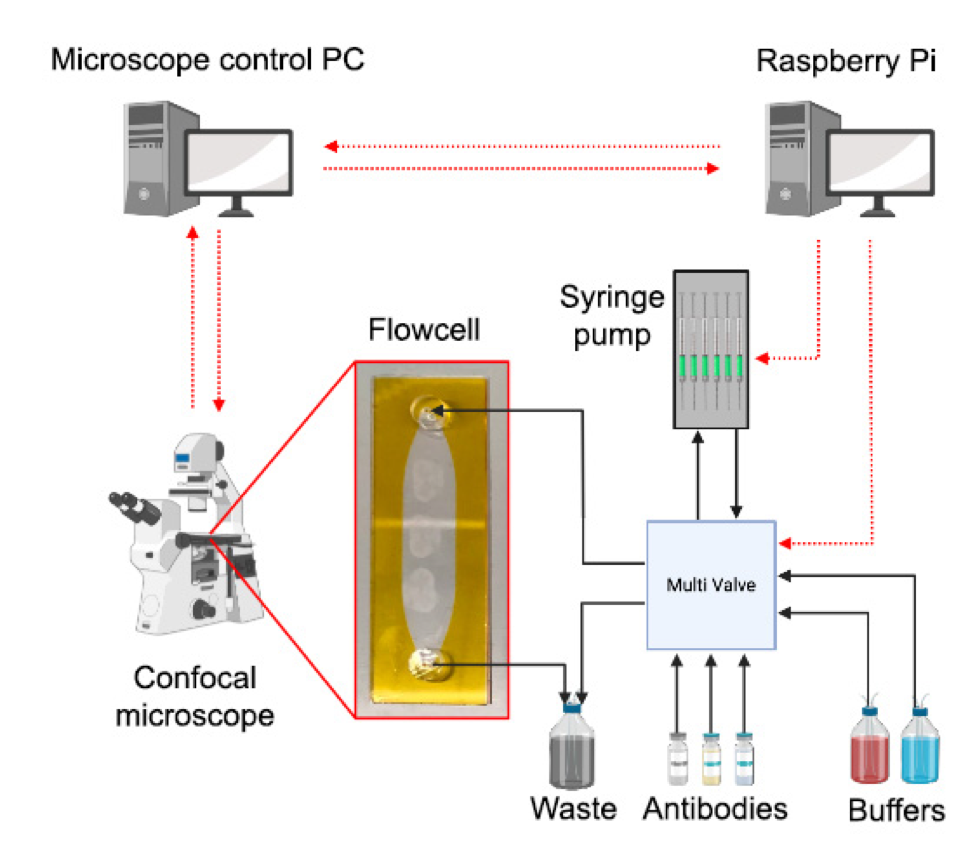 The selective vulnerability of motor neurons (MNs) in ALS is poorly understood, particularly because many genes associated with ALS are ubiquitously expressed and involved in fundamental pathways that are essential across cell types. We hypothesize that the highly branched morphology of MNs and astrocytes compared to other cell types makes them more susceptible to RNA mislocalization, which may disrupt local protein synthesis at the distal spots (e.g. neuromuscular junctions) that is essential for normal cellular and synaptic function. Mislocalization of RNA may also disrupt intercellular communication between MNs, astrocytes, oligodendrocytes, etc. and contribute to ALS pathology. Indeed, human astrocytes can have up to several million protrusions with connections to neurons in the CNS. We aim to identify the subcellular transcriptome alterations in hiPSC-derived MNs and astrocytes from ALS patients with known mutations (TDP43, FUS, C9orf72, SOD1) compared to controls. The results will also elucidate whether RNA mislocalization is a common feature of ALS and could identify new avenues for drug targets. 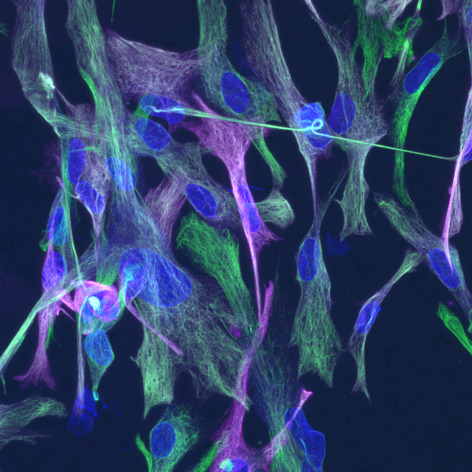 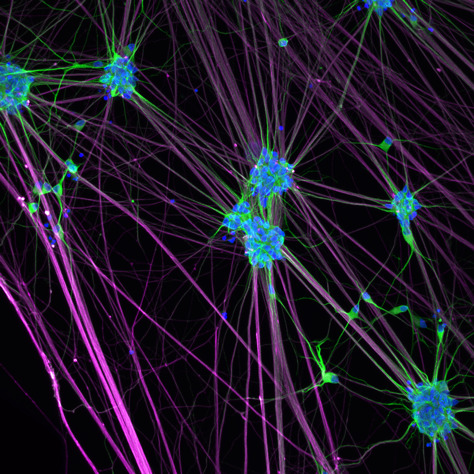 Motor neurons (on the left compartment) projecting their axons to the right compartment of a microfluidic chamber through microchannels between two compartments. Axons: in green, dendrites: in red, nucleus: in blue. This system enables us to isolate axons separately to analyze axonal RNAs.

ALS is a genetically complex disease; diverse mutations cause motor neuron death by disrupting various interrelated pathways. To date no therapy targeting a single factor can rescue motor neuron loss. Transforming Growth Factor Beta (TGF-b) is upstream of many of the pathways changed in disease and has been shown to be dysregulated in multiple ALS models. Upregulation of TGF-b signaling has been identified as neuroprotective in many neurodegenerative disease models; however, there is evidence that endogenous TGF-b signaling is disrupted in ALS. The goal of this research is to understand how TGF-b signaling directly affects motor neuron survival and gene expression in the SOD1G93A model of ALS. This project’s central hypothesis is that disease related disruption of TGF-b signaling in motor neurons contributes to their death. This hypothesis will be tested using viral therapies in a transgenic ALS animal model followed by gene expression profiling. These studies will define the role of TGF-b signaling in diseased and healthy motor neurons and begin to unravel how this pathway antagonizes pro-inflammatory pathological processes in motor neurons that are vulnerable to this disease.

Particle analysis of TGF-BRII accumulations (red) in motor neurons. Processed image for quantification on the right.

GFAP (green), a marker of astrocytes, and IL-1B (red) an inflammatory cytokine co-localize in the ventral horn of a spinal cord where TGF-BRII has been conditionally knocked out of microglia.

P62 accumulations in motor neurons in the ventral horn of the spinal cord of a diseased animal. 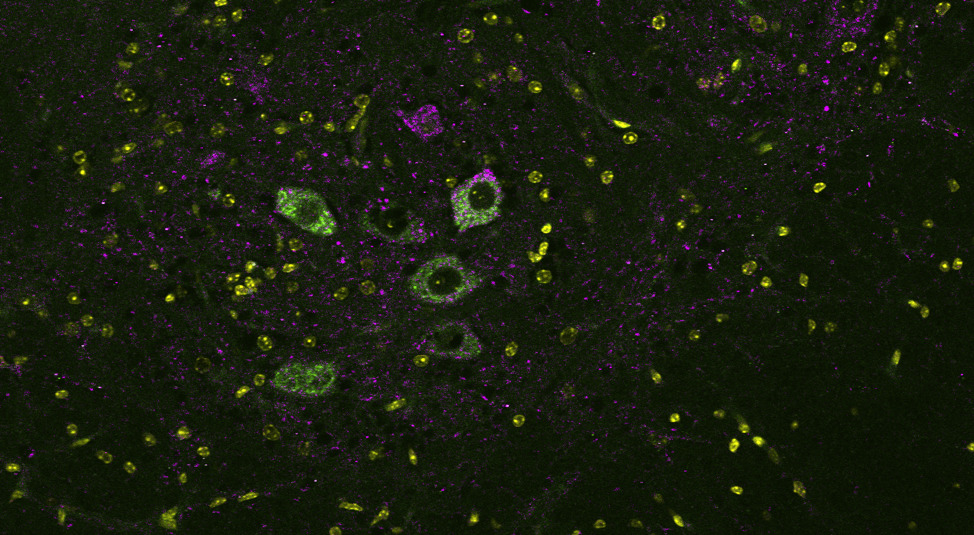