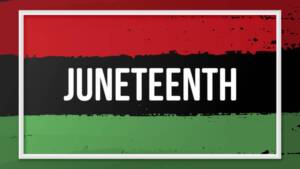 Juneteenth (also known as “Freedom Day”, “Jubilee Day”, “Liberation Day” and “Emancipation Day”) is celebrated every year on June 19th as the date that marks the emancipation of enslaved African Americans in the United States. It is, however, important to note that this date commemorates June 19, 1865, which was actually two years AFTER President Abraham Lincoln’s Emancipation Proclamation (the legislation giving slaves their freedom was declared on January 1, 1863). On June 19, 1865, Union soldiers ,led by General Gordon Granger, arrived in Galveston, Texas with news that the war had ended and the enslaved were free. General Granger read out General Order No. 3, which began with the following words:

“The people of Texas are informed that in accordance with a Proclamation from the Executive of the United States, all slaves are free. This involves an absolute equality of rights and rights of property between former masters and slaves, and the connection heretofore existing between them becomes that between employer and hired laborer.”

Prior to the arrival of the Union soldiers, the Emancipation Proclamation had had little effect on the lives of enslaved Texans, as the former Confederate state resisted abolition and had few troops available to enforce the order and grant the slaves their freedom. It was upon hearing General Granger reading out the above words that Texan slaves realized they were truly free — and so this date took on added significance for them. On June 19 of the following year, freedmen and freedwomen in Texas organized the first Juneteenth celebration (then known as Jubilee Day), and in subsequent years prayer services, barbecues, and music became a part of the celebrations. In 1979, Texas was the first state to make Juneteenth an official holiday, and as African Americans migrated from Texas to other states, the tradition spread. Modern-day celebrations of Juneteenth include public readings of the Emancipation Proclamation, singing of traditional songs such as “Swing Low, Sweet Chariot,” and reading the works of notable African American writers such as Maya Angelou and Ralph Ellison. Today 47 states (including New York) recognize Juneteenth as a state holiday; however, efforts to recognize it as a national holiday have been unsuccessful in Congress.

Juneteenth reinforces the history of African Americans and is a day of celebration and reflection. NYGC is recognizing Juneteenth as a company holiday (on June 18 since June 19 falls on a Saturday this year), to encourage our employees to take the time to reflect on this aspect of our history. One way we can all honor it is by adding works of literature by African American authors to our summer reading, and to educate ourselves and our children about black culture and history. Here is a list to get you started.

Learn more about NYGC’s commitment to diversity, equity, and inclusion.