NEW YORK, NY (October 26, 2020) – To identify new potential therapeutic targets for SARS-CoV-2, a team of scientists at the New York Genome Center, New York University, and the Icahn School of Medicine at Mount Sinai, performed a genome-scale, loss-of-function CRISPR screen to systematically knockout all genes in the human genome. The team examined which genetic modifications made human lung cells more resistant to SARS-CoV-2 infection. Their findings revealed individual genes and gene regulatory networks in the human genome that are required by SARS-CoV-2 and that confer resistance to viral infection when suppressed. The collaborative study described a wide array of genes that have not previously been considered as therapeutic targets for SARS-CoV-2. Their study was published online by Cell on October 24.

In order to better understand the complex relationships between host and virus genetic dependencies, the team used a broad range of analytical and experimental methods to validate their results. This integrative approach included genome editing, single-cell sequencing, confocal imaging, and computational analyses of gene expression and proteomic datasets. The researchers found that these new gene targets, when inhibited using small molecules (drugs), significantly reduced viral load, and with some drugs, up to 1,000-fold. Their findings offer insight into novel therapies that may be effective in treating COVID-19 and reveal the underlying molecular targets of those therapies.

“Seeing the tragic impact of COVID-19 here in New York and across the world, we felt that we could use the high-throughput CRISPR gene editing tools that we have applied to other diseases to understand what are the key human genes required by the SARS-CoV-2 virus,” said the study’s co-senior author, Dr. Neville Sanjana, Core Faculty Member at the New York Genome Center, Assistant Professor of Biology, New York University, and Assistant Professor of Neuroscience and Physiology at NYU Grossman School of Medicine. Previously, Dr. Sanjana has applied genome-wide CRISPR screens to identify the genetic drivers of diverse diseases, including drug resistance in melanoma, immunotherapy failure, lung cancer metastasis, innate immunity, inborn metabolic disorders, and muscular dystrophy.

For this project, genome editing was only one-half of the equation. “We previously developed a series of human cell models for coronavirus infection in our work to understand immune responses to the virus. It was great to team up with Neville’s group to understand and comprehensively profile host genes from a new angle,” said co-senior author Dr. Benjamin tenOever, Fishberg Professor of Medicine, Icahn Scholar and Professor of Microbiology, Icahn School of Medicine at Mount Sinai. 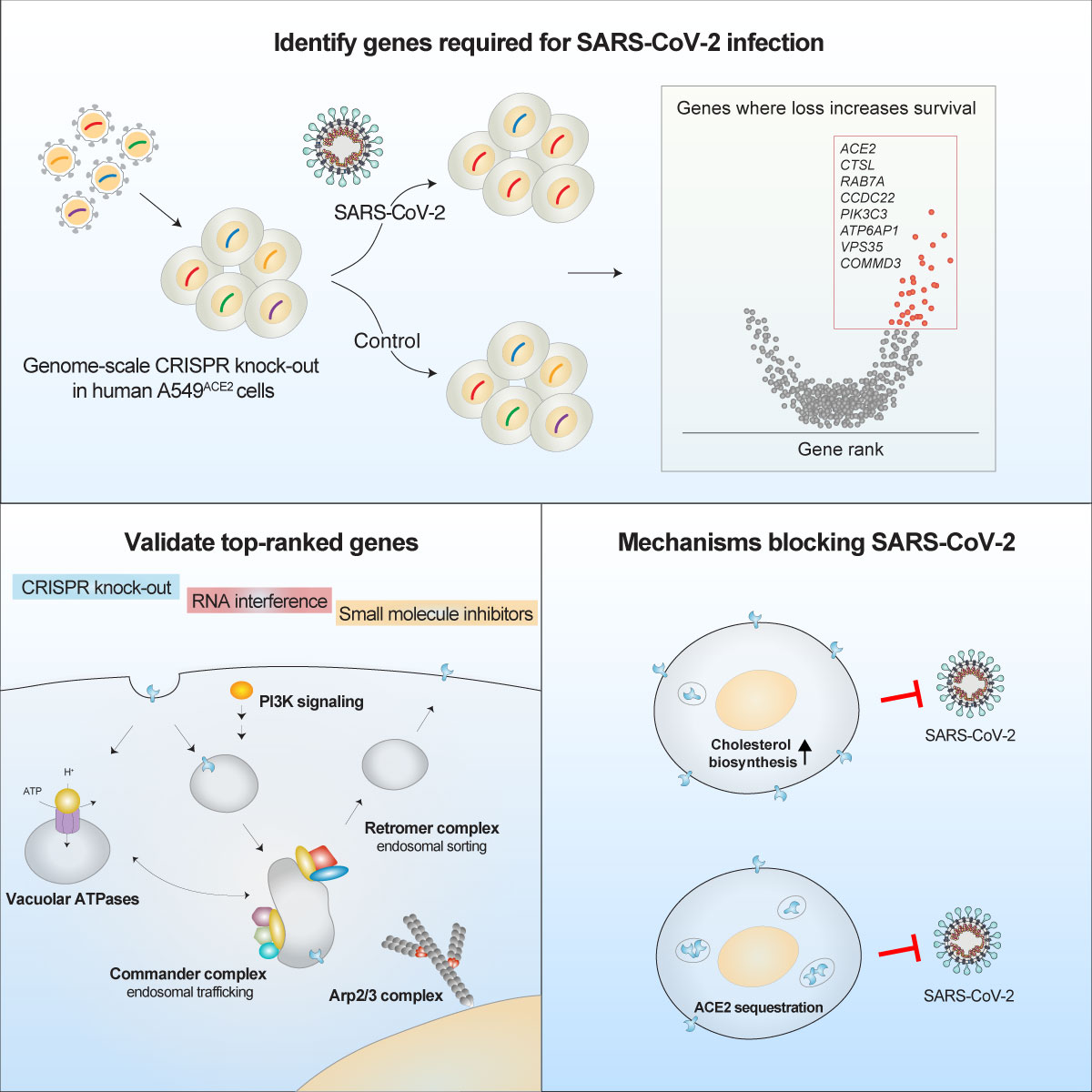 The team discovered that the top-ranked genes — those whose loss reduces viral infection substantially — clustered into a handful of protein complexes, including vacuolar ATPases, Retromer, Commander, Arp2/3, and PI3K. Many of these protein complexes are involved in trafficking proteins to and from the cell membrane.

“We were very pleased to see multiple genes within the same family as top-ranked hits in our genome-wide screen. This gave us a high degree of confidence that these protein families were crucial to the virus lifecycle, either for getting into human cells or successful viral replication,” said Dr. Zharko Daniloski, a postdoctoral fellow in the Sanjana Lab and co-first author of the study.

While researchers performed the CRISPR screen using human lung cells, the team also explored whether the expression of required host genes was lung-specific or more broadly expressed. Among the top-ranked genes, only ACE2, the receptor known to be responsible for binding the SARS-CoV-2 viral protein Spike, showed tissue-specific expression, with the rest of the top gene hits broadly expressed across many tissues, suggesting that these mechanisms may function independent of cell or tissue type. Using proteomic data, they found that several of the top-ranked host genes directly interact with the virus’s own proteins, highlighting their central role in the viral lifecycle. The team also analyzed common host genes required for other viral pathogens, such as Zika or H1N1 pandemic influenza.

After completing the primary screen, the group of researchers used several different techniques to validate the role of many of the top-ranked genes in viral infection. Using human cell lines derived from the lung and other organs susceptible to SARS-CoV-2 infection, they measured viral infection after gene knockout by CRISPR, gene suppression using RNA interference, or drug inhibition. After validating that these manipulations reduced viral infection, they next sought to understand the mechanisms by which loss of these genes block coronavirus infection.

Using a recently-developed technology that couples large-scale CRISPR editing with single-cell RNA-sequencing (ECCITE-seq), the team identified that loss of several top-ranked genes results in upregulation of cholesterol biosynthesis pathways and an increase in cellular cholesterol. Using this insight, they studied the effects of amlodipine, a drug that alters cholesterol levels.

“We found that amlodipine, a calcium-channel antagonist, upregulates cellular cholesterol levels and blocks SARS-CoV-2 infection. Since recent clinical studies have also suggested that patients taking calcium-channel blockers have a reduced COVID-19 case fatality rate, an important future research direction will be to further illuminate the relationship between cholesterol synthesis pathways and SARS-CoV-2,” said Dr. Tristan Jordan, a postdoctoral fellow in the tenOever Lab and co-first author of the study.

Building on previous work on mutations in the Spike protein and viral entry through the ACE2 receptor, the research team also asked whether loss of some genes might confer resistance to the coronavirus by lowering ACE2 levels. They identified one gene in particular, RAB7A, that has a large impact on ACE2 trafficking to the cell membrane. Using a combination of flow cytometry and confocal microscopy, the team showed that RAB7A loss prevents viral entry by sequestering ACE2 receptors inside cells.

“Current treatments for SARS-CoV-2 infection currently go after the virus itself, but this study offers a better understanding of how host genes influence viral entry and will enable new avenues for therapeutic discovery and hopefully accelerate recovery for susceptible populations,” said Dr. Sanjana.

The New York Genome Center (NYGC) is an independent, nonprofit academic research institution that serves as a multi-institutional hub for genomic research. Leveraging our strengths in whole-genome sequencing and genomic analysis, our mission is the advancement of genomic science and its application to drive novel biomedical discoveries. NYGC’s areas of focus include the development of computational and experimental genomic methods and disease-focused research to better understand the genetic basis of cancer, neurodegenerative disease, and neuropsychiatric disease. In 2020, the NYGC also has directed its expertise to COVID-19 research.

NYGC harnesses the expertise and builds on the combined strengths of our faculty, staff scientists, member institutions, scientific working groups, affiliate members, and industry partners to advance genomic discovery. Central to our scientific mission is an outstanding faculty who lead independent research labs based at the NYGC, and hold joint tenure-track appointments with one of our member institutions.