That’s the question posed in the headline of a February 3 feature in The New York Times by reporter Joseph Goldstein, who interviewed scientists at the New York Genome Center (NYGC), among other genomic experts, to weigh in on this issue.

The article details the major challenges faced by researchers throughout the city as they attempt to ramp up efforts to significantly increase surveillance. Michael Zody, PhD, Scientific Director, Computational Biology, NYGC, discusses NYGC’s work to scale up surveillance by overcoming obstacles in sample access.

The article also cites the innovative COVID-19 genomics research by NYGC Core Faculty Member Neville Sanjana, PhD, “which involves searching for which medicines might block infection by inhibiting the human genes that the coronavirus hijacks.”

NYGC’s unique position as a leader in sequencing is prominently featured in the article, as the reporter notes, “Few places have as much capacity as the New York Genome Center, where dozens of machines are often used for research projects that might involve sequencing the genomes of many people to search for specific genes underlying a certain illness.”

Also on February 3, Fox TV did a follow-up report on this article, interviewing Dr. Sanjana. Watch that video below: 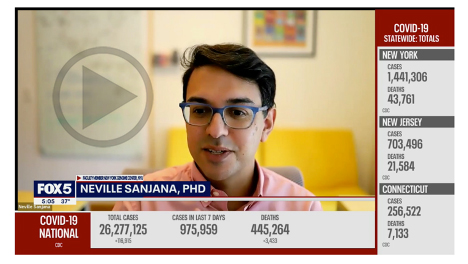