This expression of appreciation from Hemali Phatnani, PhD, Director, Center for Genomics of Neurodegenerative Disease (CGND) at the New York Genome Center (NYGC), kicked off the third (and first virtual) biannual meeting of the NYGC ALS Consortium held in summer 2021.

Over 100 clinicians and researchers from the Consortium’s 40 member institutions dialed into the June 2021 virtual event, sharing presentations on their latest ALS genomics research. The occasion was also an opportunity to mark and celebrate over five years of progress of the Consortium, which was launched at the NYGC in 2015, with support funding from The ALS Association and The Tow Foundation. NYGC Evnin Family Scientific Director and CEO Tom Maniatis, PhD, was instrumental in encouraging Dr. Phatnani to develop the Consortium, which was one of the core founding activities of the NYGC. “This unique international ALS Consortium is an excellent example of how the New York Genome Center serves as a collaborative hub to advance genomic science through broad data sharing,” said Dr. Maniatis. 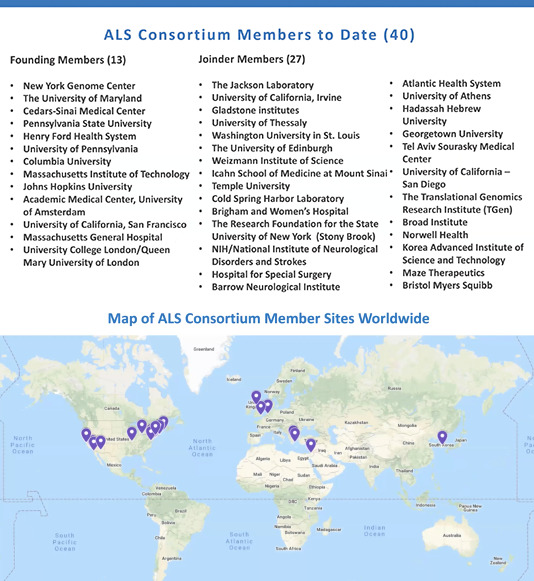 With the CGND serving as its organizing hub, the Consortium has one of the largest ALS cohorts in the world and has developed a repository of genomic and clinical data from all of the ALS patients in the cohort. The multi-institutional collaboration has fostered ALS data sharing on an unparalleled and unprecedented scale, empowering an integrated global approach to working toward new treatments and effective therapies for this complex neurodegenerative disease that currently has no clear cause or known cure.

“Hemali and her team have done a heroic job of wrangling the data from all the different organizations. Everyone has their own data dictionary, and they spent a lot of time harmonizing this data,” noted Matthew Harms, MD, Associate Professor of Neurology, Columbia University Irving Medical Center, who served as a Consortium member representative as well as moderator and presenter at the meeting.

Key milestone accomplishments of the Consortium include:

“It’s exciting to see how ALS clinical, genomic, and other ‘omics’ data are really meeting the era of big data – not only in what we are collecting, but how we are turning the corner in having tools to analyze this data,” said James Berry, MD, MPH, Winthrop Family Scholar in ALS Sciences; Director, MGH Neurological Clinical Research Institute (NCRI); and Chief, Division of ALS and Motor Neuron Diseases, Massachusetts General Hospital. Dr. Berry is a Consortium member representative who also served as a moderator at the meeting.

“The NYGC ALS Consortium has helped create a culture of collaboration and dialogue across institutions and countries,” said Dr. Phatnani, who holds a joint appointment as Assistant Professor of Neurological Sciences in the Department of Neurology, Division of Neuromuscular Medicine, at Columbia University and Core Faculty Member at the New York Genome Center. “What is particularly rewarding about this unique collaboration is that every person that joins shares ideas and improvements. The data generated are widely shared and utilized to its maximal extent. As we look towards the future, the goal is to design additional studies growing out of this Consortium that we can leverage to better understand the mechanisms of ALS, leading to new therapies and more effective treatments for ALS patients.”

Read more news about the Center for Genomics of Neurodegenerative Disease – Phatnani Lab.